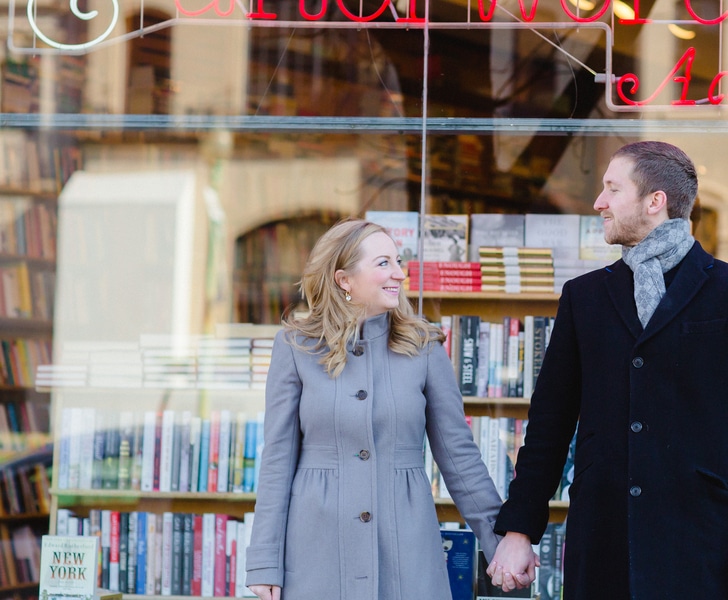 WHAT A WEEKEND Romancers! We kicked off our 2015 wedding season with a bang on Saturday with Stef & Joe’s GORGEOUS Carnegie Institute wedding and then kept the fun going with our first DIY Workshop of the year yesterday. I cannot wait to share pictures from BOTH of these amazing days. They were too much fun (though my feet and back officially hate me this morning … and let’s not even talk about DST, because I REALLY needed that hour of sleep it stole from me ;-p)

We’re kicking off the week as we normally do – with a lovely little DC engagement session. Today’s features Sarah & David, a DC couple that loves their Dupont Circle neighborhood and so naturally they had their engagement pictures there! They often frequent Glen’s Garden Market & Krammerbooks, so these two places made perfect settings for their pictures. Happy Monday Romancers! 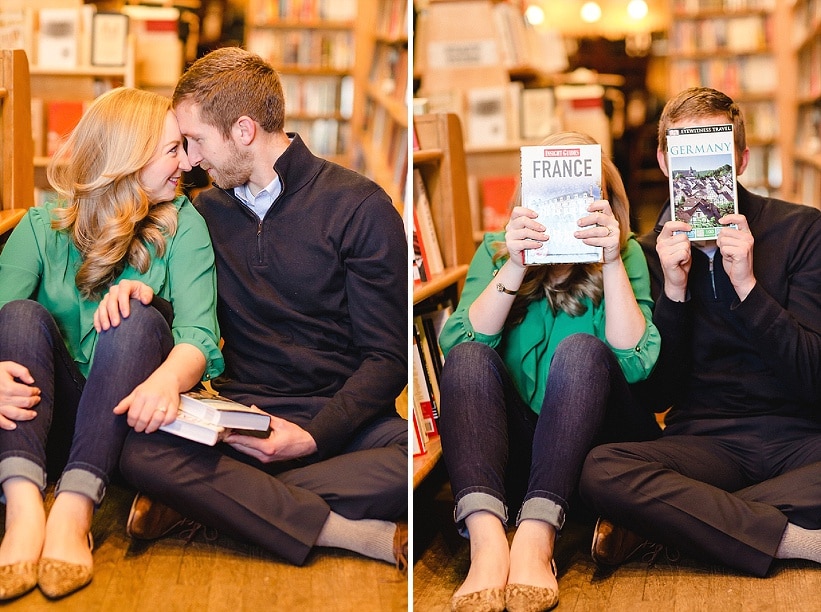 We actually met at dinner! Which is great, because we both love food :) We met a mutual friends birthday dinner. I had tried online dating but wasn’t interested in doing that any more. I was the last person to show up to dinner and I sat at the end of a very long table of couples both married and dating. I was at the single end and was ranting about how there are no more fish in the sea. I assured them that my dating stories were worse than anything they’ve heard and had the whole table laughing. I’m pretty outgoing, and used to talking a lot, so I didn’t notice the adorable man sitting across the table from me. The one who I’m now going to marry! If I had known he was going to remember this night for the rest of his life, I might have censored myself. I was wearing a patagonia hoodie and no make up and I cringed when we finally locked eyes thinking “Today! Why did you do this TODAY! With this cute guy right across from you!!!” 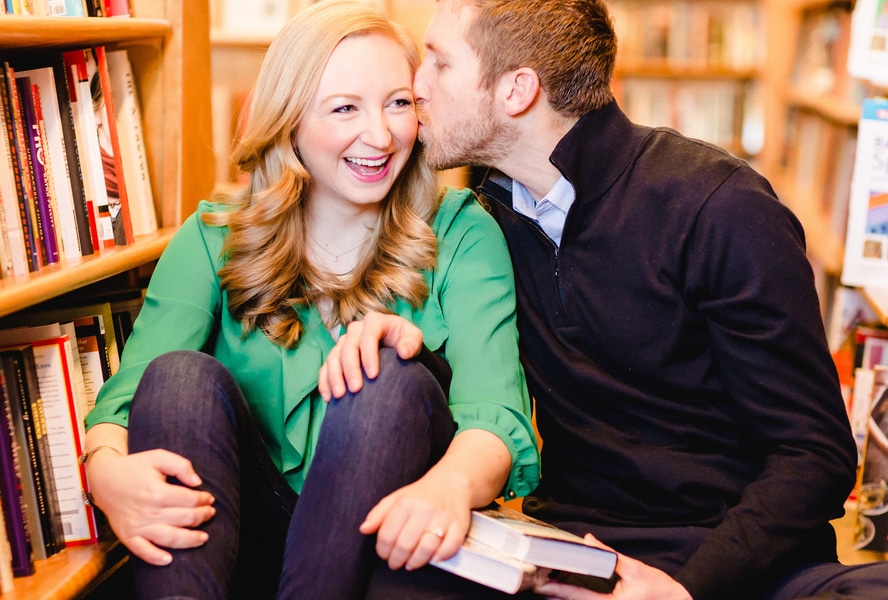 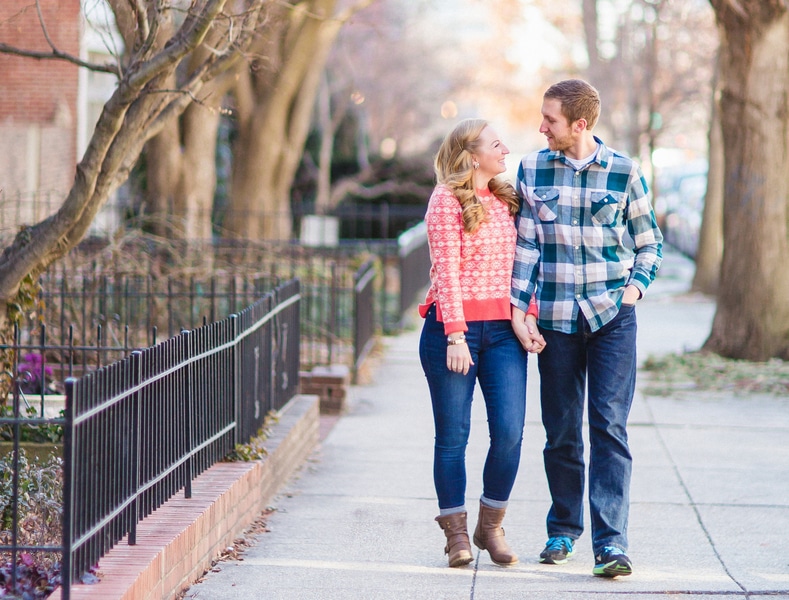 The first words David ever said to me as I finally stopped talking for food and water were, “You, I like you.” I remember going home and telling my mom how horrifically unlady like I was and how maybe I shouldn’t have been talking about single life around this new cute guy at church, that I should practice taking my foot out of my mouth instead of putting it in. David still remembers me saying I was single way more than I wish he would, but the most important part he remembers is that he was drawn to me. I think its great he fell in love with me that way. You know, when I wasn’t at my best. It just shows how perfect he is. And the rest is history. 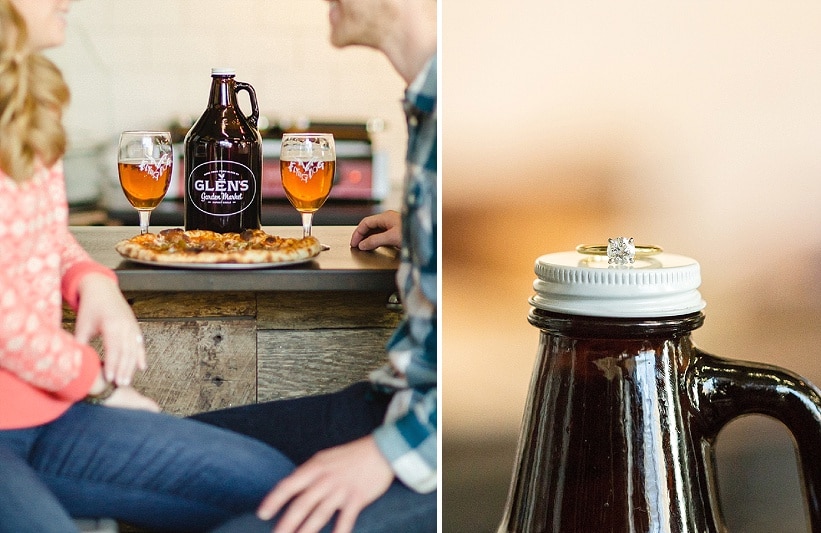 After coming back from California David had planned a speech and asked my dad for my hand in marriage in September, it’s kind of like my dad said yes first. David and I were both planning a trip up to NYC for his 29th birthday and we knew most of our days would be dictated by great food and drinks. Again, this is something we love. It only makes sense, since we fell in love over great food and great drinks in the first place! In our hunt for the perfect place for what I thought was David’s birthday dinner we found the restaurant Robert atop the Museum of Art and Design. We wanted a place with great views and that is exactly what we got. Little did I know David had called a few weeks in advance to get the best seat in the house where we were overlooking both Columbus Circle and Central Park. We had taken a cab to Robert and David his normal chatty self was indeed not. I thought to myself something was up but engagement, we had only really been dating for five months. In the cab I asked him, “you’re not going to do anything dramatic are you? It’s your birthday I am suppose to be surprising and showering you with gifts, not the other way around.” I was certain it wasn’t an engagement, but definitely something was up, what was it I thought? David’s so selfless that he would be the one to make his birthday all about me. I wanted to make it about him! He assured me he wasn’t but once we arrived and sat down the waiter brought over two dozen beautiful long stem roses. I was floored, they were beautiful I was all dressed up in NYC and my boyfriend had just gotten me flowers after he said he wouldn’t. Because he’s adorable and romantic and again, selfless. I kissed, hugged and thanked him for being the sweetest man. We ordered and I tried to talk about our trip but David wasn’t back to chipper self. He started acting weird. The weird you always hear about before somebody is about to propose and the girl starts thinking maybe its a break up dinner. It wasn’t more than a few minutes later he took out a card and I read the front and it was kind and loving, he had memorized what he had written inside and recited it. The very end of the card read, “you know how you say you love doing life with me? I want to do every day and the rest of my life with you, will you marry me?” Through out dating I would say I love doing life with you when we would be checking out at the grocery store, dry cleaners, grabbing a drink at Glenn’s or leaving someones house after dinner. It meant more than I love you, but less than marry me, it means I love my life with you. He opened the ring box and it was a beautiful round and brilliant diamond on a yellow gold band. I thought I said yes right away but David says it was nearly 10- 15 seconds. The rest of dinner was just us and champagnge. I had completely lost my apetite for the amazing food and kept joking with David saying, “I’M A BRIDE NOW!” He was more than happy to eat for the two of us now that his nerves had subsided and he recalls it as the smartest night of his life. 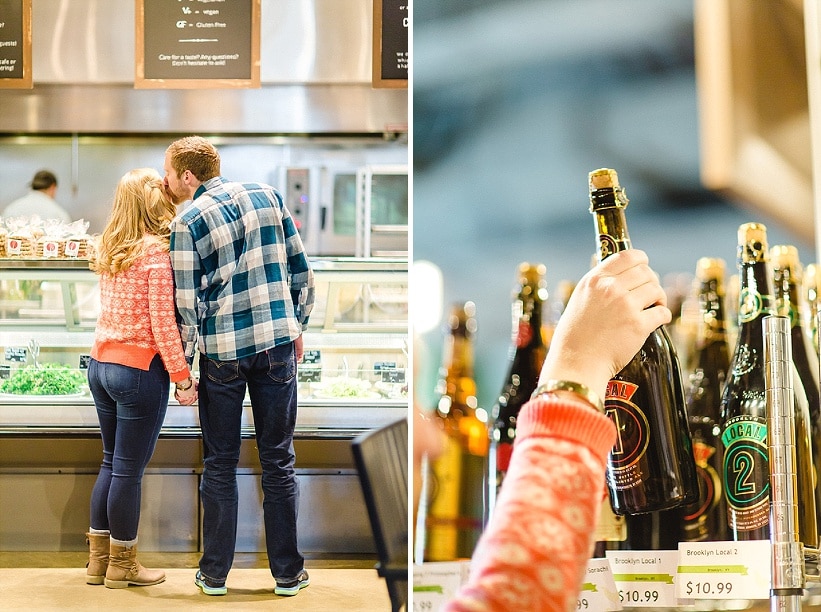 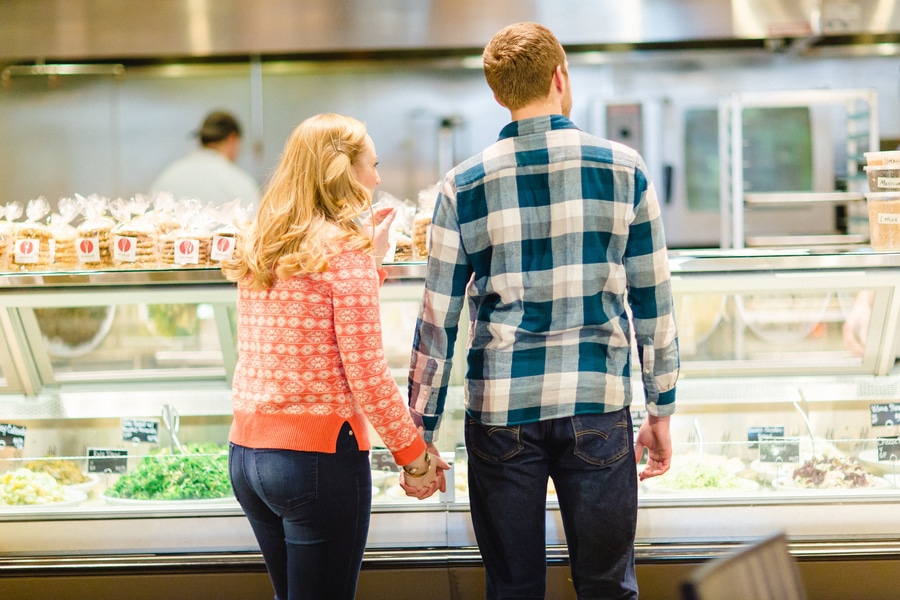