In the little town of White, Virginia, there exists a place that is probably the closest we might ever get to a real world, Jurassic Park. This place is called Dinosaurland and it is awesome.

Enter Allie & Danny, an equally awesome couple that, fell in love with a short story that described their relationship perfectly. The story just happened to involve dinosaurs too, so they decided to make dinos a complete part of their engagement session AND wedding! Oh this is going to be so so awesome. Check out their amazing offbeat Virginia engagement session and love story below! 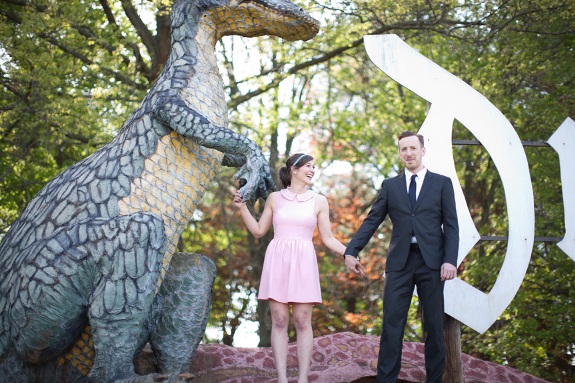 ^I die. Not only is this engagement session full of so much awesome, Allie & Dan are adorable & oh so stylish!

Allie explains how the dinosaurs found their way into their love story:

Many years ago Danny and I found a book that described us and our relationship to a “T”. The story is about love of course but the twist is that the characters are dinosaurs! We wanted to make the story a part of our wedding and will be reading it during our ceremony on September 14, 2013 at the Barns of Hamilton Station.

We racked our brains when thinking about a location for our engagement session when it hit us…DINOSAURLAND!!! Located in White, Virgina, Dinosaurland is one part road trip must see and one part playground but the ultimate in quirky must sees close to DC! 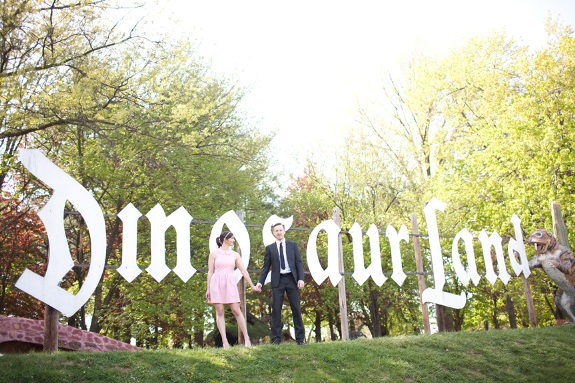 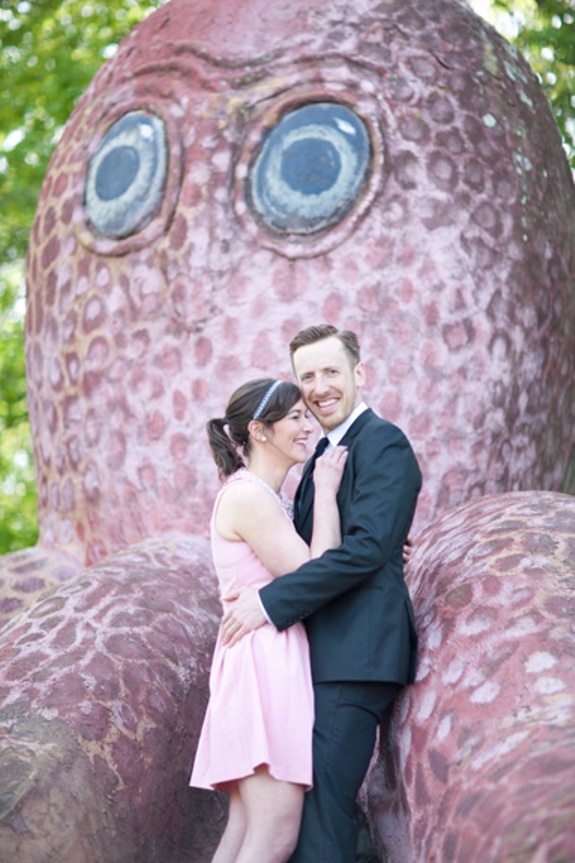 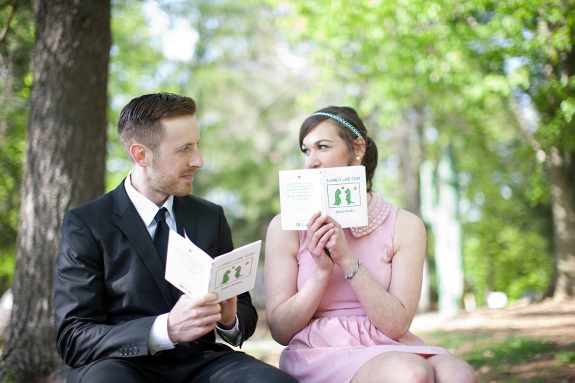 It should have happened long before it did. Sometimes, it’s hard to believe our paths crossed so many times without ever meeting. The semi-accurate timeline below is your quick reference guide in how fate led to our inevitable love story: 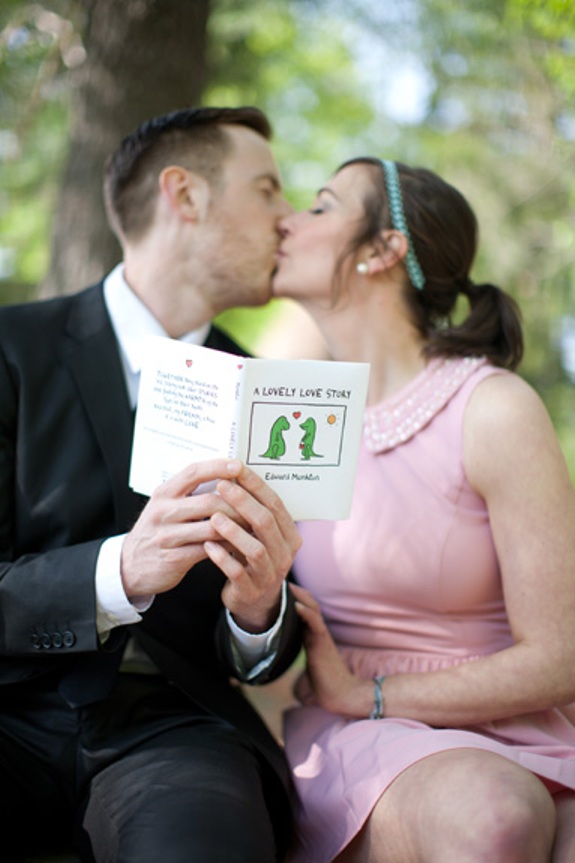 1989: Danny and Allie both attend Reston Day Camp for the summer but since Allie is a year older, they were in different groups. Although they didn’t know each other they both loved exploring the woods, the crazy/awesome counselors, and Lake Newport pool parties every Friday! 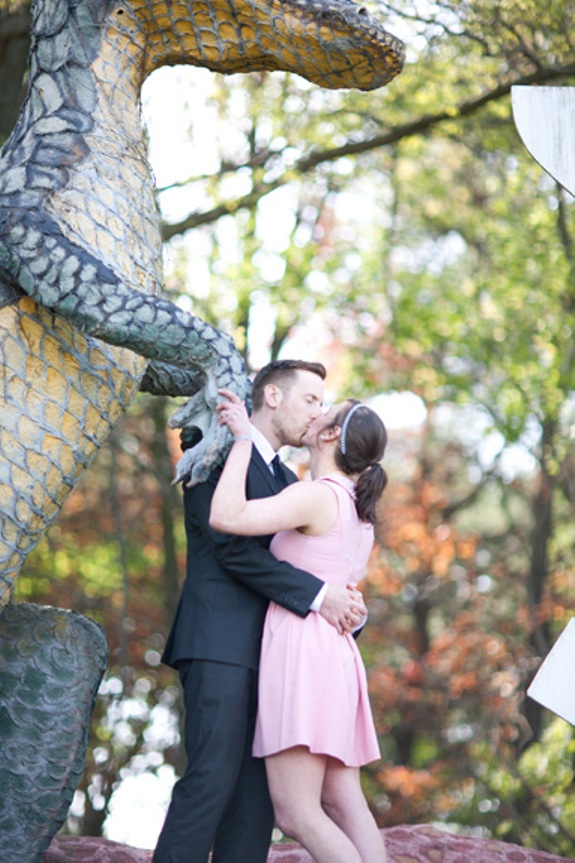 Click inside for the rest of Allie & Dan’s dino-riffic, Dinosaurland engagement session, love story and by Kate Triano Photography.

1991:  Danny becomes the camp champion of Capture the Flag and 2nd place winner of the belly flop contest. 1st place went to Allie’s twin sister Katie! Not yet being interested in girls, Danny walked confidently past his competition. You would at least expect some gloating on Katie and Allie’s part but alas….still strangers! 1995-2000: Allie returns to Reston Day Camp every summer as the next generation of crazy/awesome counselors. Danny wants badly to work at Reston Day Camp but thanks to his studies in Engineering the hiring managers feel Science Camp is a better fit. Although they both don blue shirts denoting their counselor status, Day Camp and Science Camp are worlds apart. 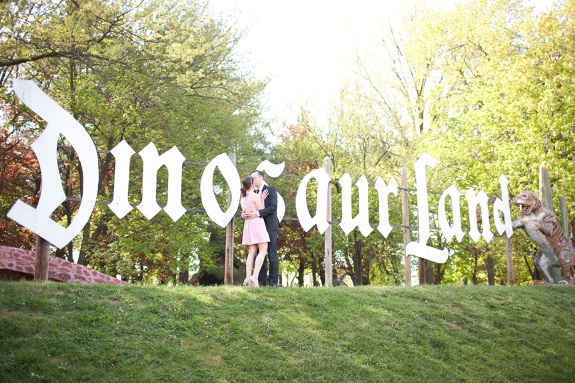 2004: Katie and Steve move-in together! Danny hangs with them often. It remains a mystery and slightly unbelievable that Danny and Allie still have yet to meet. Weird, right? We know! 2006: Danny and Allie FINALLY meet for the first time! Danny is smitten. Allie laughs at everything he says.

2007– Danny sends Allie an email filled with beautiful and kind words. Allie invites Danny to visit her in New York. They fall in love. 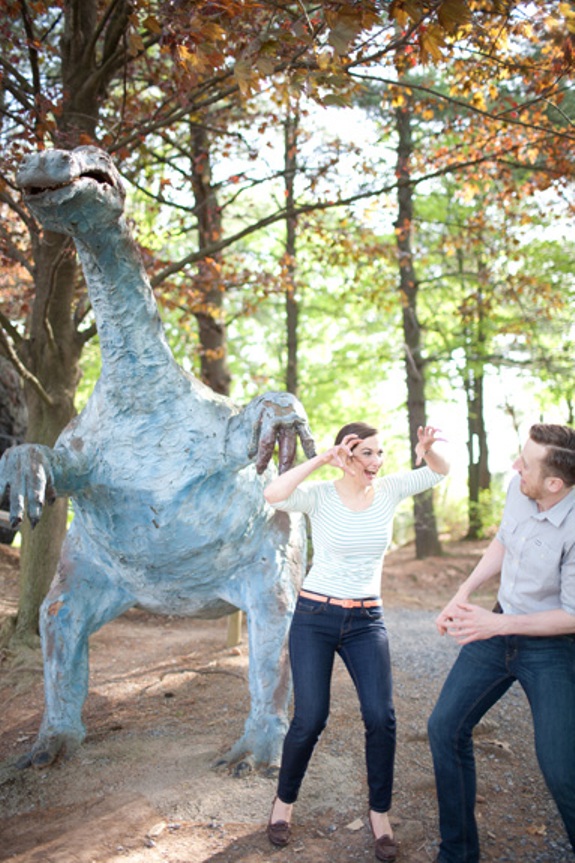 2012 – Danny proposes to Allie with a beautiful heirloom ring (and a packet of hot sauce) on a cold but sandy beach in North Carolina. After a kiss and an impromptu dance party, Allie said yes!

^Their proposal actually led them to being featured on Taco Bell’s social media (the hot sauce packet was a long running joke between the couple) AND they got sent a full box of Taco Bell swag from it too! Will there be more dinos at the wedding?

We had a blast walking amongst the dinos and it was such a fun way to combine a special story with our special story. We can’t wait until September where yes…more dinos will be featured! Congratulations Allie & Dan! Thank you so much for sharing your awesome Dinosaurland engagement session with us!  A special thanks again to Kate Triano Photography for sharing her beautiful images with us! I think it goes without saying that I cannot WAIT to see their wedding pictures!