I apologize for leaving everyone hanging on Friday with no post. Life got crazy and I didn’t have the time I thought I would to get this awesome, offbeat anniversary shoot scheduled. While I was off frolicking at the beach, I hope you all had a great end of last week/weekend as well. Now that I am back I will share Katie & Andrew’s amazing 5-year anniversary shoot thanks to Maggie Winters Photography [submitted via Two Bright Lights]. I haven’t seen a love shoot this fun and awesome since Steve & Amanda’s water balloon engagement shoot!

Katie and Andrew have been married for five years but didn’t have engagement photos taken when they were married, and they wanted to have some fun photos taken of the two of them in love! Katie mentioned that she wanted to use color dust/holi powder and I couldn’t have been more excited.

I know you guys are going to love this bright color explosion of an anniversary shoot to get your week started. Let’s do it up. 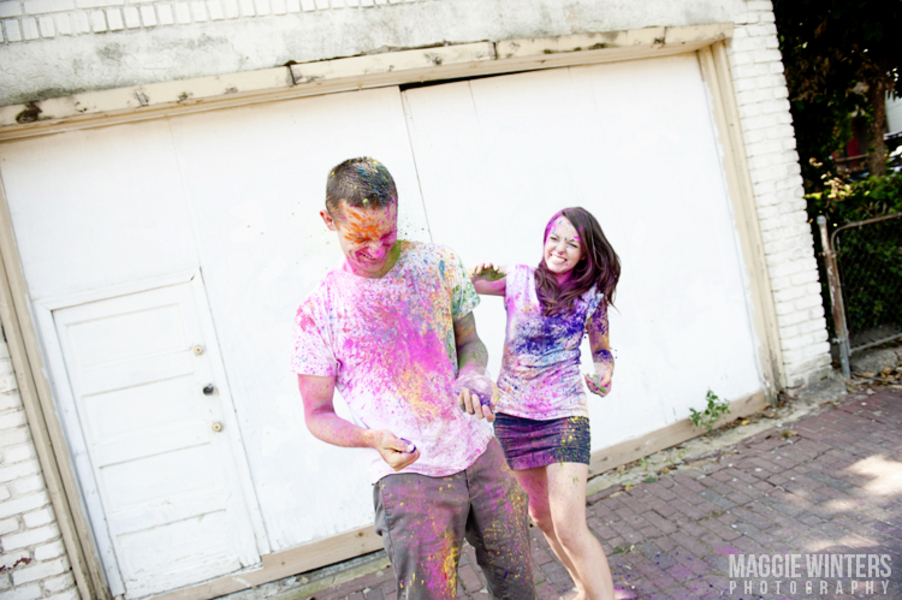 Andrew and I met in 2004 at the University of Michigan. We met after a mutual friend realized we had both worked at the same orphanage in Malawi, Africa, at different times. I sent him an email and a few weeks later we found a time to meet up on campus. The rest is history!  We graduated together in 2005 and moved to Philadelphia where we both taught for several years. We got married in 2007 and joined the the Peace Corps together in the island Kingdom of Tonga from 2007-2008 and then moved to Washington, DC. 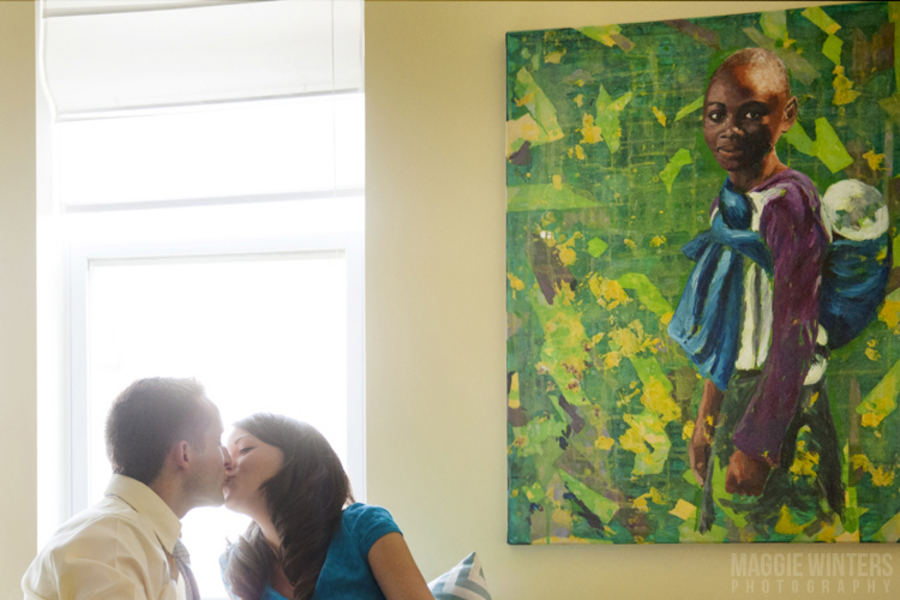 We’ve been in DC for 4 years now and love living here. Andrew is a PhD student at the George Washington University, studying Counseling and I am a Senior Policy Analyst at ActionAid USA. We are both artists as well. Andrew does a lot of painting, on the side, and I am a part-time photographer and graphic designer. 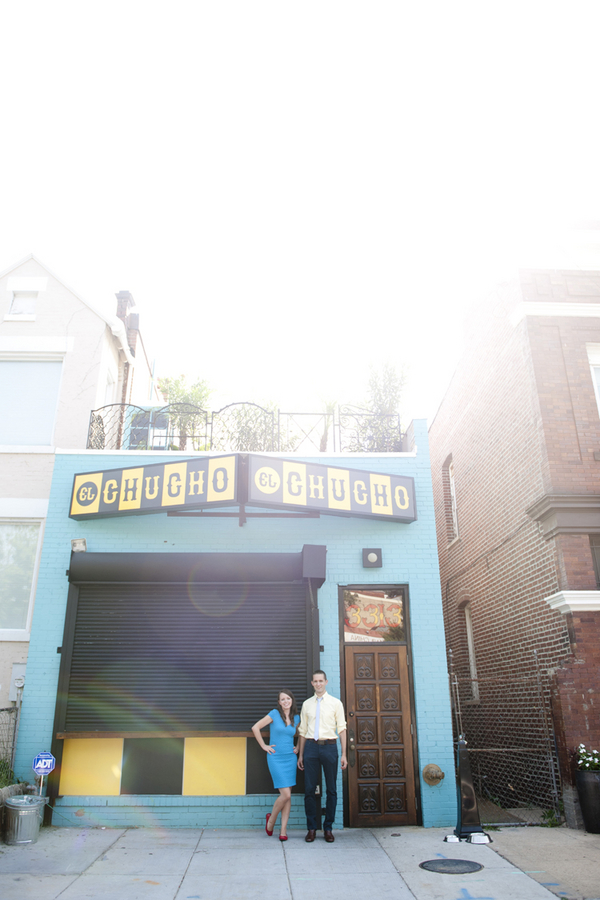 We wanted to have a photo shoot to celebrate our anniversary for a few reasons. First, because we never had engagement photos when we got married, so most of the photos we have together are just from our wedding. Second, because I have been a photographer for a few years now and because I’m always behind the lens I have almost no photos of the two of us together from the last few years. We wanted to document our lives a little, here in this place where we had our first home together. 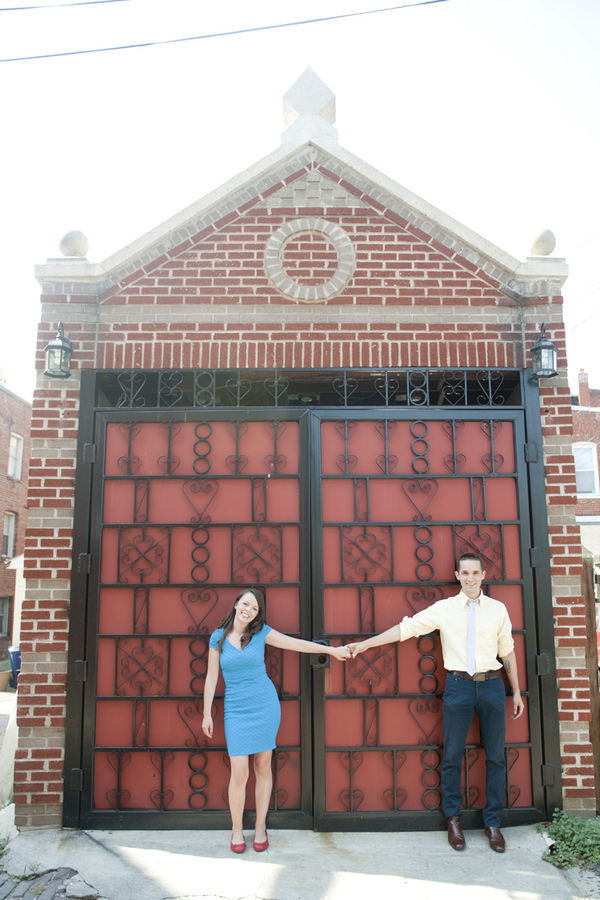 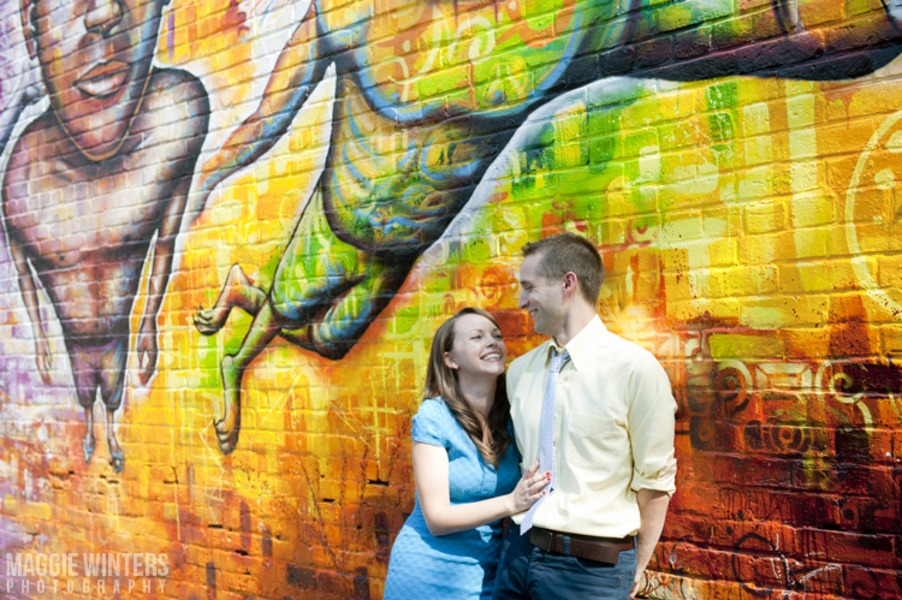 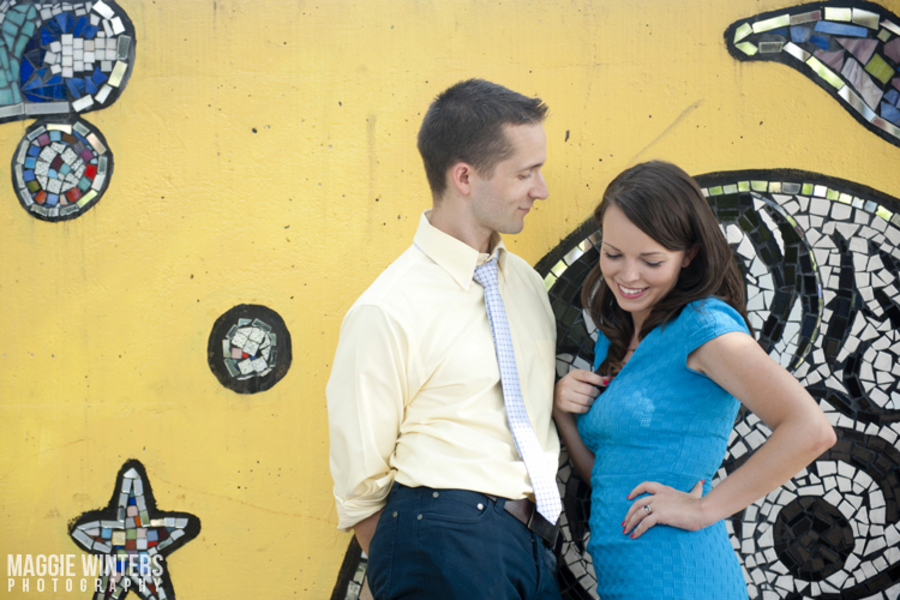 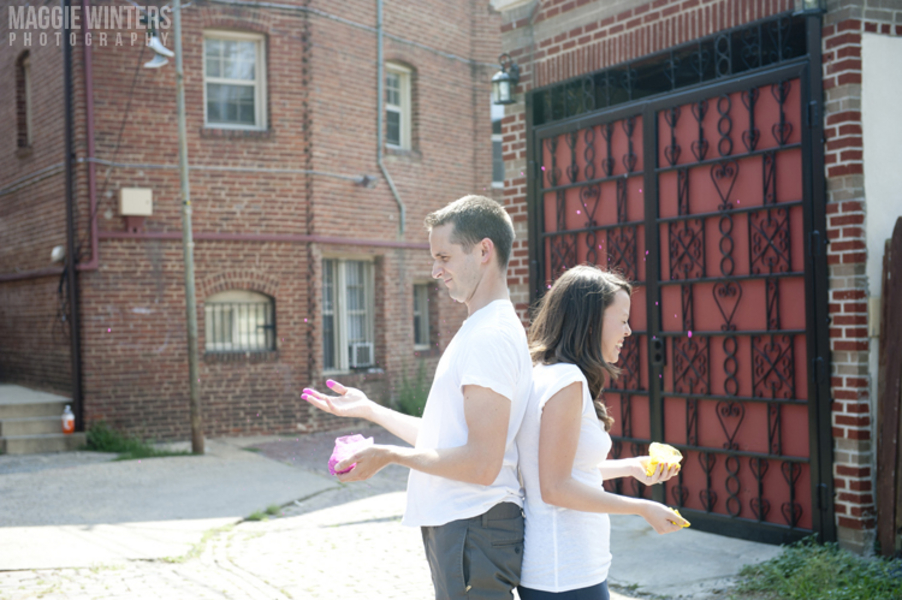 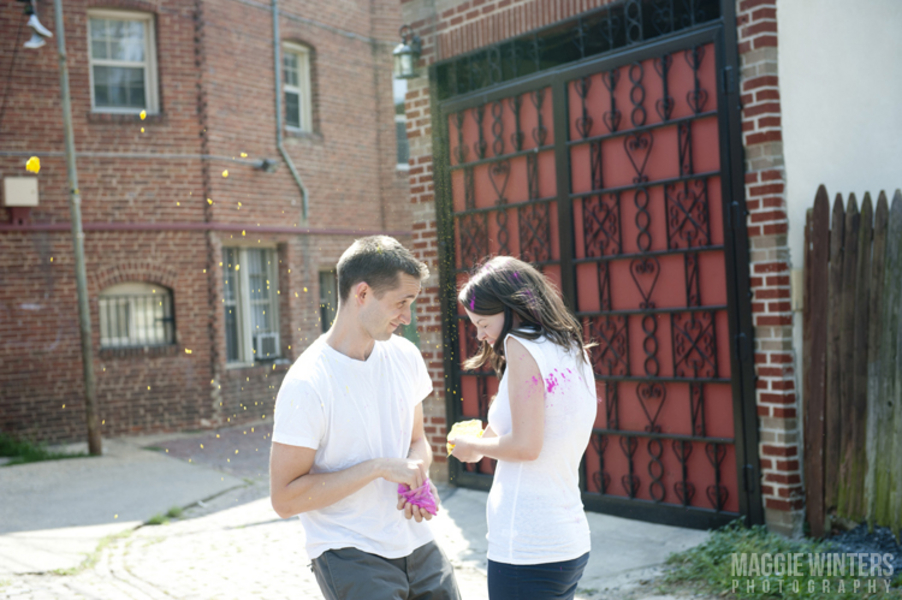 Click inside to see the rest of this awesome, offbeat anniversary shoot in Washington, DC. The rest of the pictures are so much fun!

We bought our first house in Columbia Heights and wanted to do the photo shoot in our neighborhood as we feel like it’s become so much a part of us over the years. The North Columbia Heights Green, the community garden in our backyard, is especially important to us. When we moved in here the green was just a garbage dump and we helped Washington Parks and People transform it into a beautiful community space. 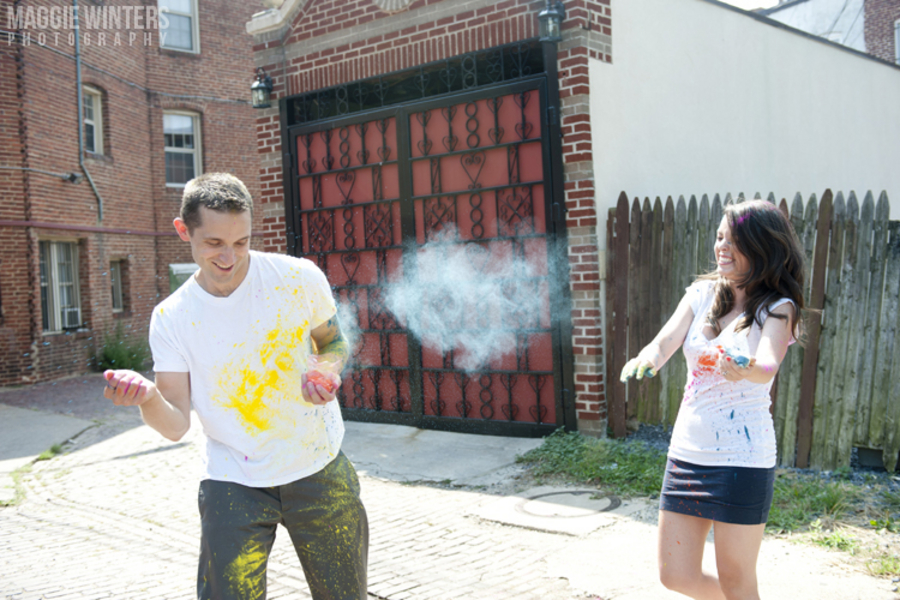 I suggested the idea of using the holi powder to Andrew because I said I knew most of our pictures would be goofy anyway. Andrew is a goofy guy, which I love, and has a hard time keeping a straight face, especially when there was is a camera around. The holi powder ended up being even more fun than I thought it would be!  I wish we could do that kind of thing every day! :) 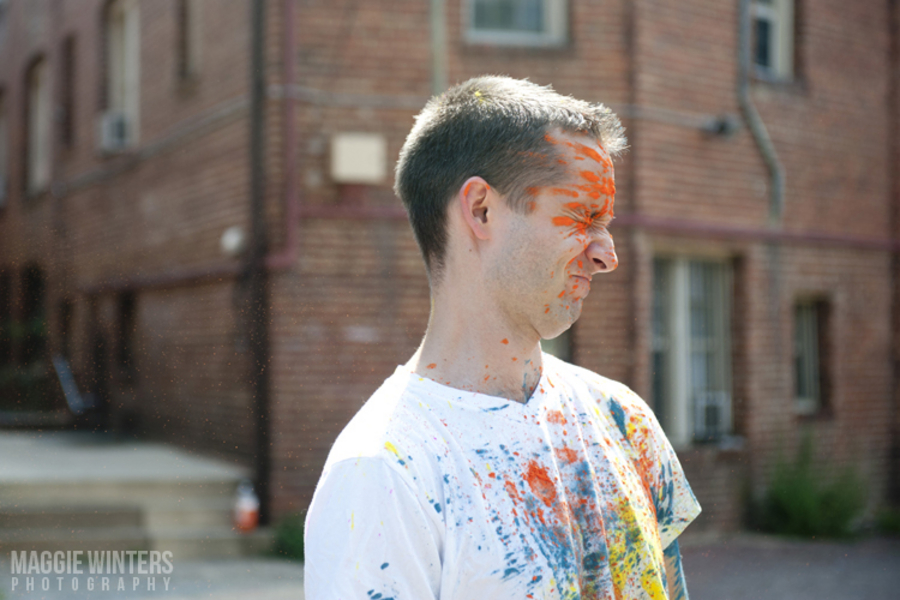 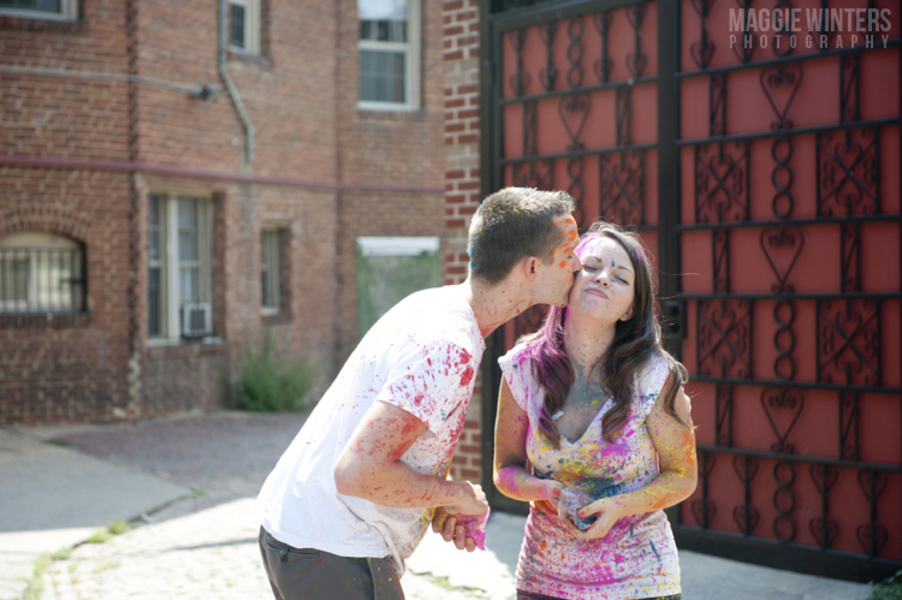 Thanks so much to Katie & Andrew for sharing their awesome, offbeat Washington DC anniversary shoot with us! A special thanks again to Maggie Winters Photography & Two Bright Lights for making this feature possible! Capitol Video: Part 2 of a Traditional Indian Wedding in Maryland