A few weeks ago my best friend Steve sent me a copy of the speech he was preparing to give as a best man. The speech was perfect – the right mix of humor, emotion, love, & stories. I cried reading it, and when I attempted to read it aloud to Andy in the car, I had to stop twice because I got choked up [yeah, it was THAT good …. also I am THAT much of a sap!].

I thought it would be helpful to blog for those looking for help, advice, or tips on writing a wedding speech, either as a best man, maid of honor, or any other honorable wedding attendant that is blessed with getting to speak to the couple. I’ll share some of my own personal tips & guidelines, and invite anyone to offer more in the comments section.

Oh, and don’t worry – Steve has allowed me to share his awesome speech with you all too :)

How to Write a Wedding Toast ~ Tips, Tricks, & Advice 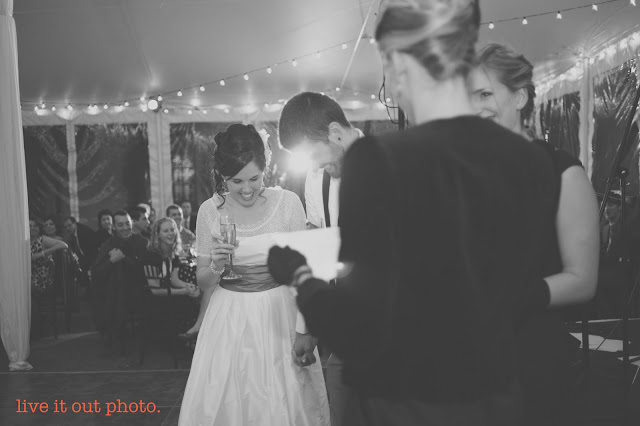 The easiest way to begin a wedding toast is by saying thanks. Thank the couple, thank the parents, and/or thank the people that are responsible for making the day possible, and thank everyone for joining in the celebration.

Using thanks as your opener will help calm your nerves, so you aren’t attempting to open with a joke or story off the bat. It will give you some time to ease into the speech and find some comfort with talking in front of a crowd. 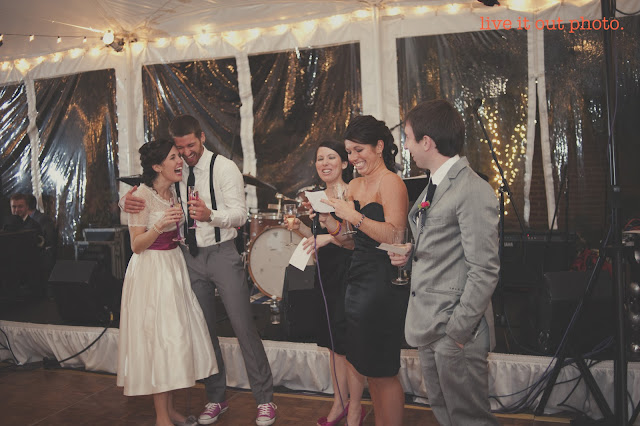 Most wedding toasts should include a bit of humor to lighten the mood – it will boost your confidence as the speech giver. If you are a natural when it comes to humor, write some quips yourself, if you aren’t – then stick to what you’d feel comfortable saying.

Ask some friends if they attended any weddings with a great wedding speech joke, or use the one from Steve’s toast – it’s hilarious.

This directly correlates to #2 – if you do use a joke, or tell a personal story [more on that next] I cannot stress enough the importance of keeping the toast at a PG rating. Nothing is worse than saying something inappropriate or embarrassing to the couple. Remember why you are there and remember your audience [which will more than likely include not only grandparents, and those older than you – but many people that probably don’t even know you … leave a good impression.]

Take for instance the joke the best man delivered at a wedding I was at a few weekends ago – it involved the groom being a player baseball player, not very skilled at any positions … and then correlating that to the bride having that same problem, later that night.

ugh. I felt awkward just typing that – much less listening to that in a room of people at an event such as a wedding. So PLEASE, remember – keep your toast at a PG rating!

Don’t forget to include some personal quips and stories into your wedding toast. This will make the toast custom to the couple you are speaking for – and will make the speech something worth remembering.

Don’t, however, tell too many “inside” jokes that the crowd doesn’t understand. Keep the personal memories surface level, and light – stories that don’t require much explanation [and are clean!] are the best to include in wedding toasts.

5. Don’t forget the other half

Andy’s sisters were EXCELLENT at mixing stories of Andy as a child, but also mentioning what it was like for them, when he met me :)

Just like we recommended to being your speech with a “thanks” – the perfect way to end it is with … the TOAST! You might think this is obvious, but the speech should require a little more than just a “cheers”! Wrap up your wedding toast by inviting the room to raise a glass to the couple and wish them well in their new life together.

In addition to the tips above – don’t forget these general speaking reminders:

1. Pace (no one will enjoy the speech if they can’t understand you … slow down!)

2. Volume (no one will enjoy the speech if they cannot hear you … talk loud!)

3. Length (I would say to keep it no more than 3-5 minutes long, after that people might start to get distracted/talk amongst themselves)

Click inside to read Steve’s amazing speech – the perfect example of a fantastic best man toast that included everything we mentioned above!

Steve‘s fantastic Best Man Toast… dare you not to cry!

I’d like to thank everyone for being here tonight and joining us in celebration of marriage of John and Lauren. And I’d like to thank Mark and Diane Stillman and John and Mary Anne Kuhn for making this wonderful day possible.

So this is it. The big day. John and Lauren are finally married. It’s been an honor to be the best man for such a great couple.

Okay, only one part of that story is true. John really did get down on one knee and propose I be his best man while we were completely surrounded in a bar. I accepted immediately. John’s been my best friend for years now and there was no way I would have said no.

I wanted to find that one perfect story that really defined my friendship with John. I couldn’t do it. I couldn’t narrow it down to just one. So I have a few memories I’d like to share with all of you.

-The first few days after John moved in and became my roommate in college. We bonded over watching extended marathons of Cops. We’d shout suggestions at the TV and offered free legal advice for the criminals. We liked to keep it classy.

-The 2.5 years we lived together and only had one real argument. He drank my milk.

-The time we went to buy the video game Rock Band and John withdrew all but $3 in his bank account in order to pay for it. I paid for dinner that entire week.

-The time John asked for my help to cook Lauren a surprise birthday dinner. John wanted to cook her 6 pounds of chicken nuggets. I suggested chicken parmesan. She loved the chicken parm.

-All the times we fly home to Pittsburgh after a long trip and find John & Lauren at the bottom of the airport escalator holding a sign with my name on it. We’ve never asked him for a ride home, but he still shows up anyway.

-The 2.5 hour round trip drive John makes every March 31st so we can wake up to an April Fools joke taped to our door for everyone to see. I’ve been evicted, served a warrant, had my car decked out in Tin Foil rims. My neighbors look at me funny now.

-How enthusiastically John celebrates my birthday. And how long it takes him to leave the following morning.

-The time we tailgated the sunset in a mall parking lot, and security kicked us out almost immediately. This actually happened two days ago.

-the time John took me out to ice cream to tell me he was going to ask Lauren to marry him. I don’t know if he was more nervous telling me or asking Lauren but in both cases, the visor was off and you knew he was serious.

I will say that it’s been an honor to have John as a best friend, and I couldn’t be happier for you. You’ve found a woman who is kind, honest, caring, and who deserves nothing but the best husband there is. Luckily you nailed her down before she had a chance to meet him.

But seriously Lauren, I’ve gotten to know John quite well over the years, and I will say this – you have a husband who is devoted to you and will never let you down. I’ve seen him at his worst, and I’ve seen him at his best.. but through the years I have never seen him as happy as he is as when he’s with you.

Please join me in a toast:  John & Lauren, I know the two of you will have a long and happy life together. I speak for everyone here when I say I wish you both the very best. May your love last forever.  To John & Lauren

Perfect right?! Anyone else have any wedding toast tips or advice to share? Leave them in the comments!

Part 1 of a Traditional Indian Wedding Video in Maryland