Porter Watkins Photography was on hand to capture the very lovely Priyanka & James. Priyanka shares how her and James met:

Once upon a time, I (a focused & studious curly-haired freshman girl aspiring to be a chemical engineer) met a blond-haired, blue-eyed freshman boy who was on the college soccer team. We both bonded over our hatred of physics class and before we realized it, became the kind of friends who could talk about anything for hours and hours….and still do! After 4 years in Pittsburgh at Carnegie Mellon University, I went on to discover my passion for children and teeth, moving from Philadelphia to NYC, and finally to Washington DC, where I’m finishing up my 2nd year of dental residency. James decided to jump coasts and pursue a master’s degree in San Diego. Eventually, he moved back to the east coast to build “top secret” warcraft, and is finishing up the 1st year of his MBA at Carnegie Mellon, back where it all began! Whether you believe in chance or fate, we’re thankful to have found each other again, even if years and years later. After all, you know what they say….better late than never! 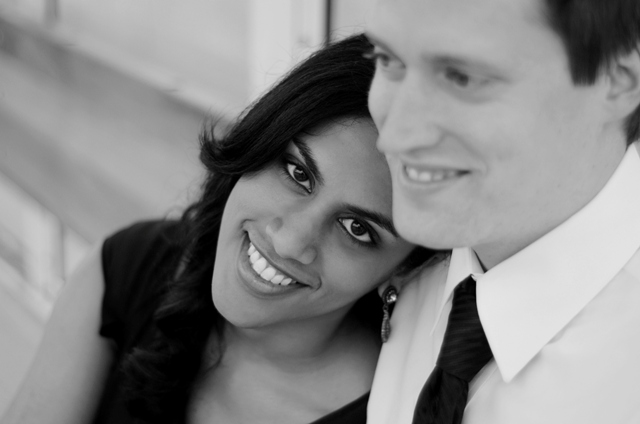 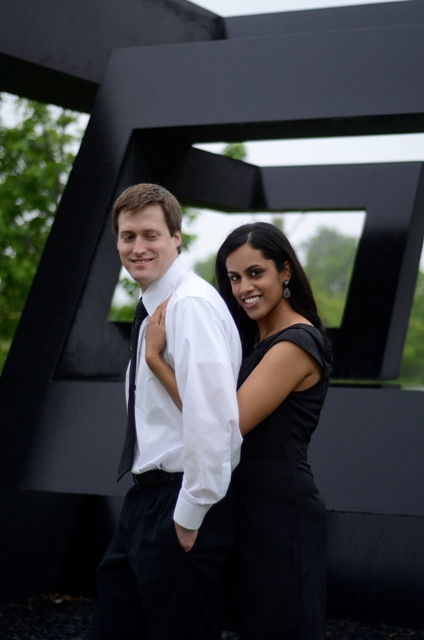 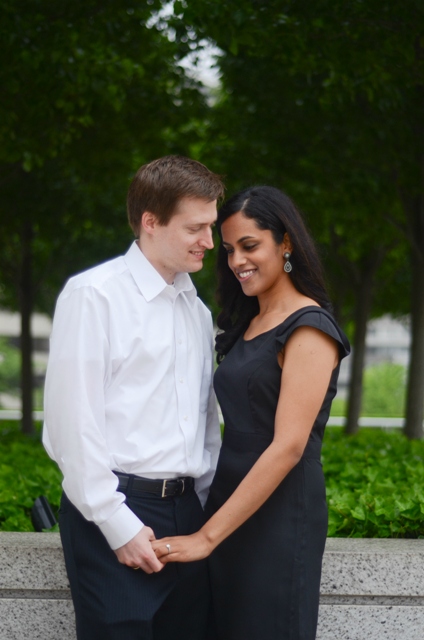 Click inside to see more of this adorable shoot and to get the entire proposal story from James himself (btw, it’s a fantastic & funny story)…

The Proposal Story by James:

Backdrop: Washington, DC
Date: February 12, 2011
Temperature: Chilly
Saturday started out with me telling Priyanka that I had a business meeting with a colleague in DC (oldest trick in the book…) and as you can imagine, she was really excited (NOT) that I was going to be spending a good portion of the day without her. Of course I was making some final preparations to SURPRISE the heck out of her! When I came back hours later, we headed out for a walk to good old Firehook Bakery in Cleveland Park. She was still a bit miffed that I had been gone for a while (she had no idea what was coming). Anyhow, we both got teas and headed off to one of our favorite places in Washington, DC… The Zoo! (reflection of the present) While on our walk through the zoo, I told her that I had made dinner reservations in Georgetown since we hadn’t gone out to dinner in a while. She asked what restaurant we were going to, and of course I told her it was a “surprise”. 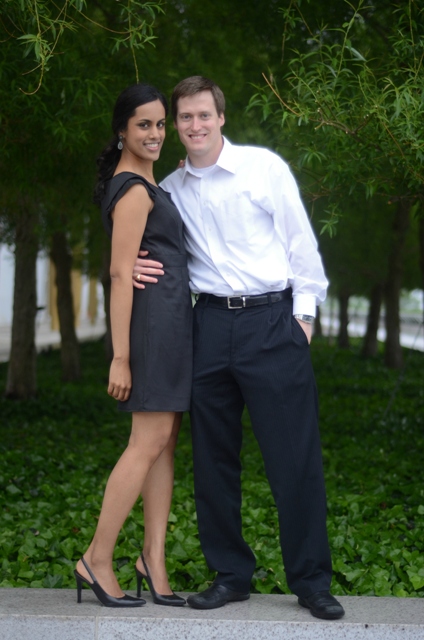 We headed over to dinner and it was pretty chilly outside (gloves and scarf weather). I intentionally parked by her old apartment in Dupont (a reflection of the past). She thought I was crazy for parking this far away from Georgetown. We started walking through Rose Park, a quiet and peaceful spot amongst the city bustle… We walked down the path (FREEZING) and she said, “Well, I GUESS this is a nice surprise.” At that moment, I grabbed her by the arm and said, “That’s not the real surprise, THIS is…” I began to tell her the sweetest things in the whole world and it hit her immediately. She lost it, then I lost it… I did manage to get on one knee and actually propose after the waterworks. Meanwhile, she is officially blacked out at this time. (She doesn’t remember a thing I said, can you believe it?!?!). She may have been blacked out, but she innately remembered to take her glove off immediately and position her hand for the ring. It was so seamless that it had to be instinctual (she had been waiting for this for a long time :) ) 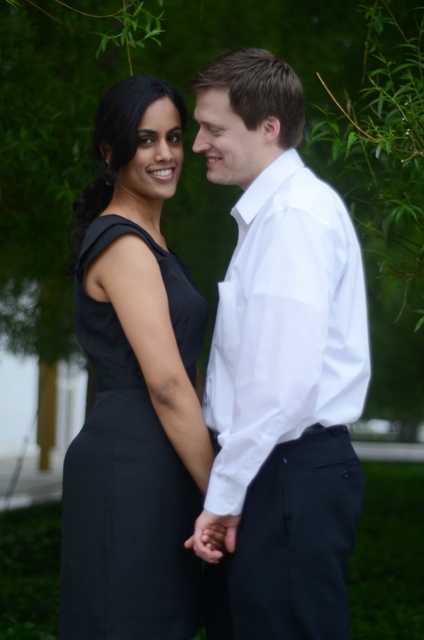 The ring fit, phew, and she said “yes”. She was in a state of shock, so I stood up and gave her a hug and said, “so you’ll marry me?” She finally realized what was going on and hugged me back, saying, “yes, yes, yes, yes, yes, yes, yes, yes, yes!!” We were both still in shock but smiling ear to ear! We headed to get Ethiopian food at a restaurant we hadn’t tried yet. We always like sharing new experiences together(a reflection of the future). 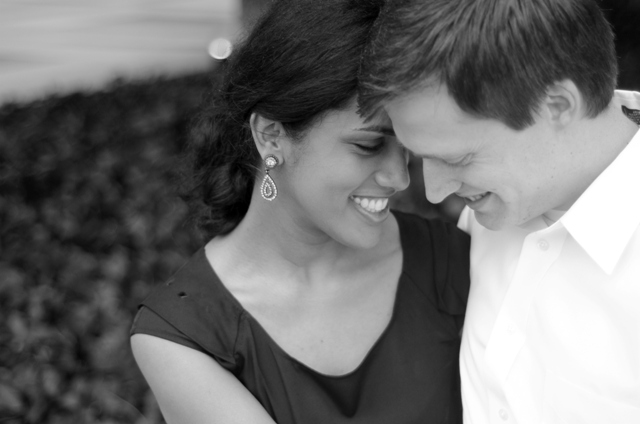 Love this shot … looks like they are dancing & so in love 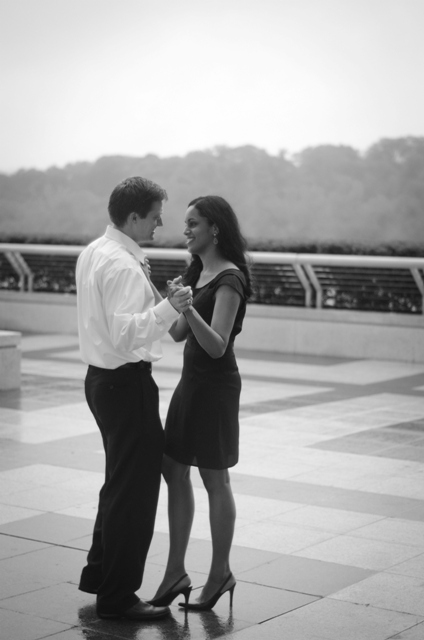 As you can imagine, Priyanka (and me) smiled the whole rest of the day and boy does she have a beautiful smile! It was the start of a new chapter for us and we look forward to the times ahead. The theme of the proposal was a reflection of our past, present, and future. But enough of the mushy stuff…I’m just the luckiest man alive cause she said YES! Thank you again to Porter Watkins Photography for sharing this lovely shoot & thank you to Priyanka & James for sharing your story with us! Best of luck with the rest of your wedding planning!!!

Wedding Music That Doesn’t Suck: All I Want Is You