We had SUCH a great long weekend with friends out in the Shenandoah Valley – I never even knew this place existed! One of my best friends from college suggested we get a cabin together, a few weeks back, and the date we picked happened to coincide perfectly with the two days off from school that Evie had. So we packed up the car (why do two little people require SO MUCH SH*T?!) and took a nice scenic drive out there. The cabin we stayed in was AWESOME, the company was FABULOUS, and the laughter was ENDLESS. We stopped in Luray Caverns (was very cool … but gets a little long with a Toddler & infant in tow) and went on a beautiful hike with a waterfall at the bottom. All in all, a really really great #unplugged weekend.

I was supposed to blog this awesome wedding last week before I headed out of town … but you know. So we have it for our Monday today instead – which is good because I am going to try HARD to stay productive (hello inbox & impending wedding season) while catching up on a sleep AND single parenting until Wednesday. Let’s go…

Guests arrived to the ceremony to a drink fridge with the message “Sip Champagne When We Thirsty” filled with splits of champagne and Miller High Life – the Champagne of Beers.

The couple felt very strongly about the importance of their Union and wanted to incorporate aspects that celebrated the exciting nature of their wedding. For the ceremony set up, the couple stood on a round white platform with Gary at the center of their guests, they wanted to be surrounded by the love and support of their families and friends as they joined their lives.

As part of the ceremony decor they had a selection of the Supreme Court ruling legalizing gay marriage on a chalkboard with a gold frame as their backdrop. To begin the ceremony each member of their wedding party read a line from the selection of Justice Kennedys statement- ” No union is more profound than marriage, for it embodies the highest ideals of love, fidelity, devotion, sacrifice, and family. In forming a marital union, two people become something greater than once they were. As some of the petitioners in these cases demonstrate, marriage embodies a love that may endure even past death. It would misunderstand these men and women to say they disrespect the idea of marriage. Their plea is that they do respect it, respect it so deeply that they seek to find its fulfillment for themselves. Their hope is not to be condemned to live in loneliness, excluded from one of civilization’s oldest institutions. They ask for equal dignity in the eyes of the law. The Constitution grants them that right.”

The couple wanted the guests to really be a part of the ceremony – so they did a candle lighting, but each guest received a candle and as Danny’s best friend, Priscilla, belted out, “Love You I Do” from Dreamgirls, guests lit their candles started at the back of the gathering, passing the flame forward to the Grooms mothers, who then lit the Grooms candles and they then lit one unity candle. This signified their guests sharing their love and support for the union. The couple wrote their own vows which they read to each other from matching notebooks. Once the boys had sealed their marriage with a kiss – they were surprised to find a 3 piece trio hidden just beyond the ceremony space. A secret flash mob had been orchestrated to top off the dramatics of the ceremony. The Couples friends popped up and serenaded them with the song Rather Be.

Ben and Danny wanted their reception to be non stop fun, so they opted for more outside the box elements at the party. Guests enjoyed a Mac n Cheese Bar with two styles of Mac n Cheese, chicken, beef or shrimp and a plethora of toppings to choose from, and a Taco Bar with chicken and fish tacos and all the fixing you could dream of. The couple wanted to try and keep the line at the bar down so they had a beer wall with 4 beer taps that guests could help themselves to the beer of their choice in a branded cup – Miller High Life (as a nod to Danny’s Grandfather) Blue Moon, Bud Light and Heavy Seas.

Ben is a huge music fan so throughout the decor were little nods to songs – The buffets were branded – Baby got Mac, and Something to TACO bout – the bar said Poppin Bottles and the Beer wall said – “Life Looks Good Good Good with my Beer Goggles On” as well as the Beer Fridge message mentioned earlier. The evening ended with an Ice Cream Sundae bar and cookies from Birmingham Alabama (Bens hometown) and no evening of dancing and partying would be complete without breakfast sandwiches! The Reception decor was masculine and natural with a little bit of glam. If they had their druthers the couple would have been married outdoors, but dealing with mother nature would have been too stressful for Danny – they opted to bring some elements that brought the outdoors in. The couple refers to themselves as The TippMasters (Tippett/LaMaster Mash up) so for the DJ backdrop they had a 22′ Hedge wall with their moniker routed out in large gold letters. The Bar was a huge wooden bar with hedge bar fronts.

The couple wanted to have their relatives who have passed represented, so they incorporated photos of their grandparents in the Back bar decor along with other elements that had some meaning to the couple. Guests were able to lounge in leather lounge furniture and maroon sequin linens gave a pop of color to the space. Danny and Ben are lucky to have many talented friends, including Gene Shepard who made their wedding cake for them – Gene was able to take the Grooms suits and create a beautiful and delicious cake for the pair that was a wow piece at the event.

Stay at home mom, and juggler of several part-time gigs. After hiring Bree to coordinate my wedding in 2015, I joined the team the following year as a coordinator, and now co-editor of the blog. My husband, Justin, and I live in NE DC and spend our days chasing our active baby boy, cooking together, and enjoying craft beer. 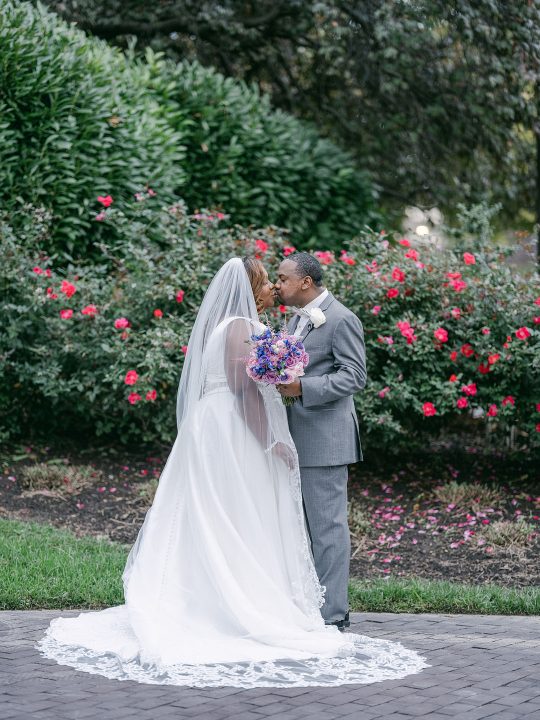 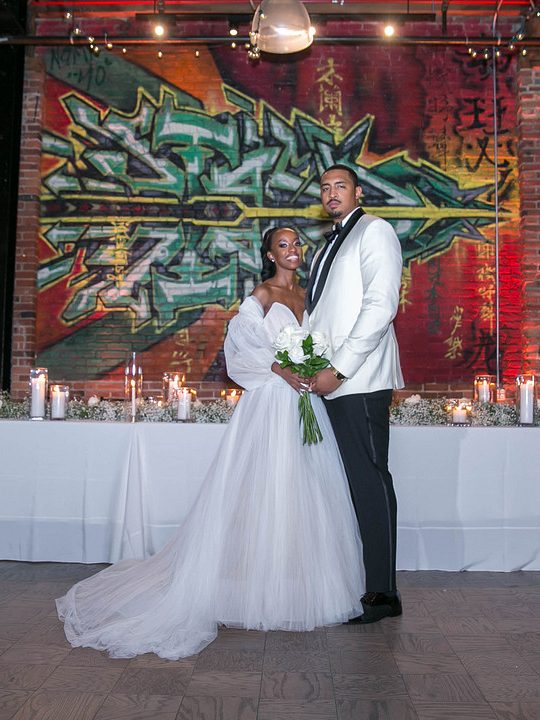 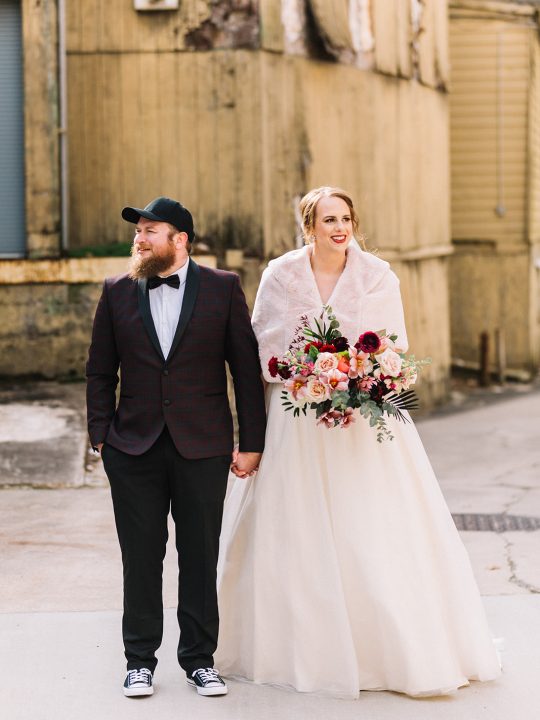 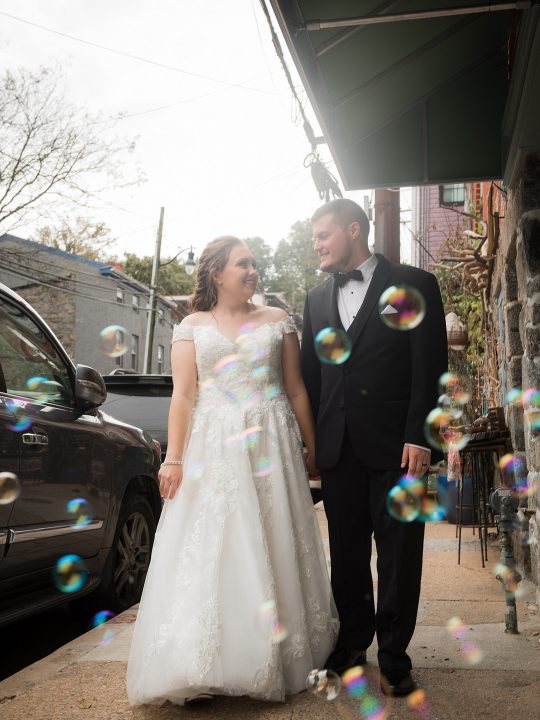 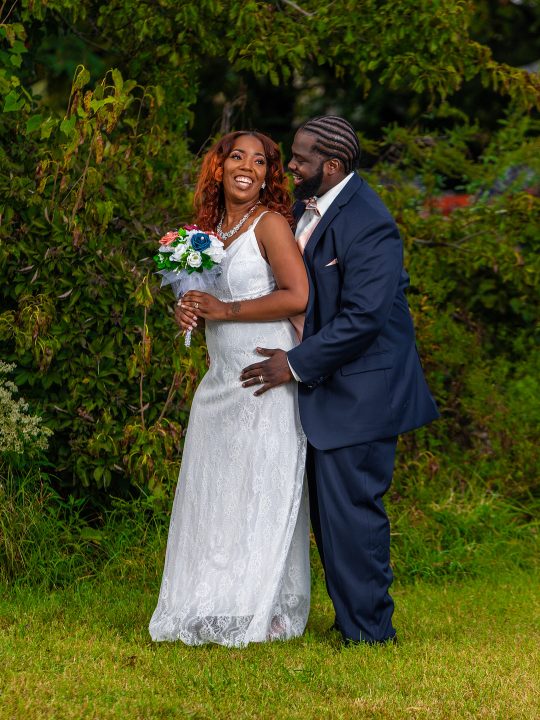 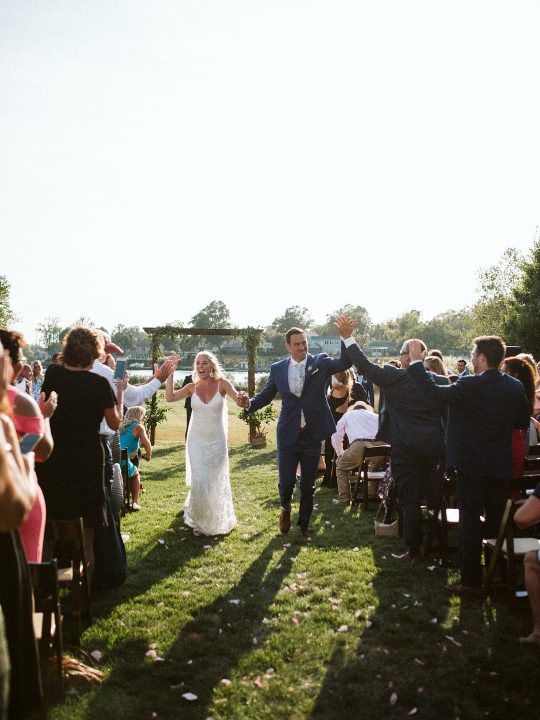 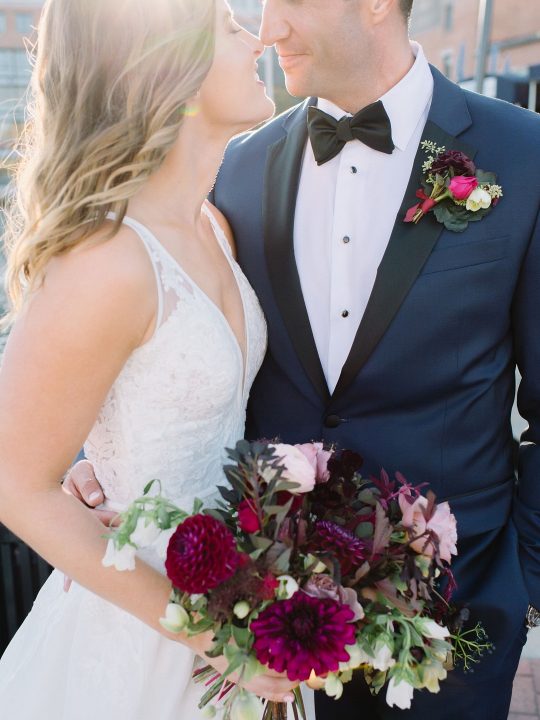 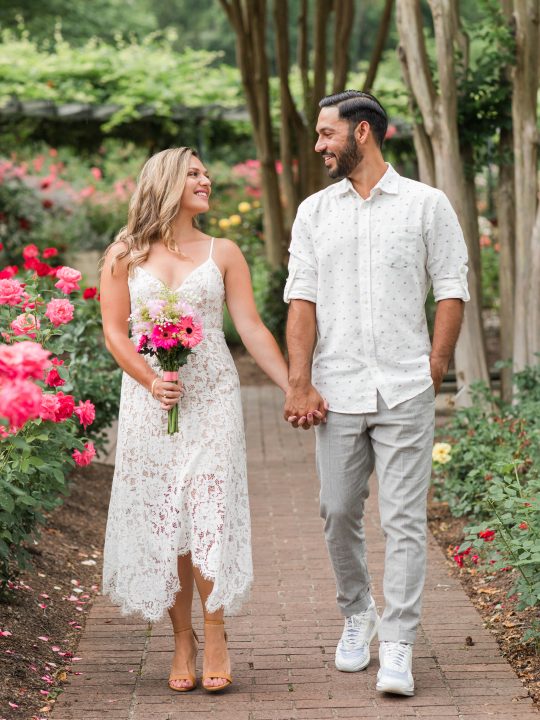