First let me start off with an apology – I had intended on blogging WAY MORE while I was out on vacation, but the lake was too damn relaxing and I really needed the break. July is going to be insane with Andy traveling for a lot of it, and my personal goal to finally get the #CapRoShop up and running by the end, so it was nice to take a pretty big break from emails, blogging, and work in general, and spend time with my family (both immediate and extended) up in Vermont.

So now let’s turn to today’s engagement feature – the insanely talented Duhon Photography, sharing one of the coolest couples I have come to know, Sarah & Jaimee! I have the honor of getting to be Sarah & Jaimee’s wedding coordinator this Fall, but really I knew from the minute I read their inquiry that this was going to be more fun than work. Our initial consult lasted 2 hours as we spent more time talking about DC real estate, home decor, and our families, than wedding planning. But we did get to that – and I am so lucky it did, because their wedding is just going to ROCK. And their engagement pictures only scratch the surface at what awesome, genuinely warm, and inviting humans these two are. Plus the sick scenes around DC only add to it. Can’t wait for your wedding guys!

Jaimee and Sarah met the old fashioned way – on the dance floor. It was the night of the now defunct, but forever beloved, monthly party called She.Rex at the now defunct Chief Ike’s Mambo Room (RIP old D.C.). Jaimee spotted Sarah on the dance floor and couldn’t resist her plaid button down and smooth moves. Sarah was a little more skeptical about Jaimee, but decided to give the hot Filipina with the embellished top and incongruous shoes the benefit of the doubt. They danced the night away and at the end of the night, as Carly Rae Jepsen’s “Call Me Maybe” played in the background, they exchanged numbers. Jaimee’s first text to Sarah,”Hey, I just met you and this is crazy, but here’s my number so call me Jaimee.” She.Rex and Chief Ike’s may no longer be with us, but their legacy lives on through their love.

Jaimee and Sarah’s relationship grew over a shared love of food, overeating, pickle- and jam-making, and a healthy obsession with the amazing pickup truck Tim Riggins drove on Friday Night Lights. Fast forward two years from that fateful night when the She.Rex (RIP) dance floor brought them together: Jaimee decided to make an honest woman out of Sarah. And herself.

During their daily morning coffee, Jaimee presented a make-shift music box that she had painstakingly – and secretly – created out of a Crayola tin to play one of their songs. Inside was the “engagement truck” they had always joked about (because what kind of lesbian wouldn’t want to be proposed to with a pickup truck?) along with the actual ring.

The ring is made of birch wood inlaid with brick from the first apartment where Jaimee and Sarah lived together. After months of reconnaissance, Jaimee accurately guessed Sarah’s ring size. However, she guessed wrong about her own and had to send hers back to be resized. Accounts differ about what Jaimee actually said, but as soon as Sarah figured out what was going on, she immediately said yes. There were tears and celebration and many failed attempts at taking pictures that did not look terrible. Then they just gave up and sang some karaoke together in the living room. 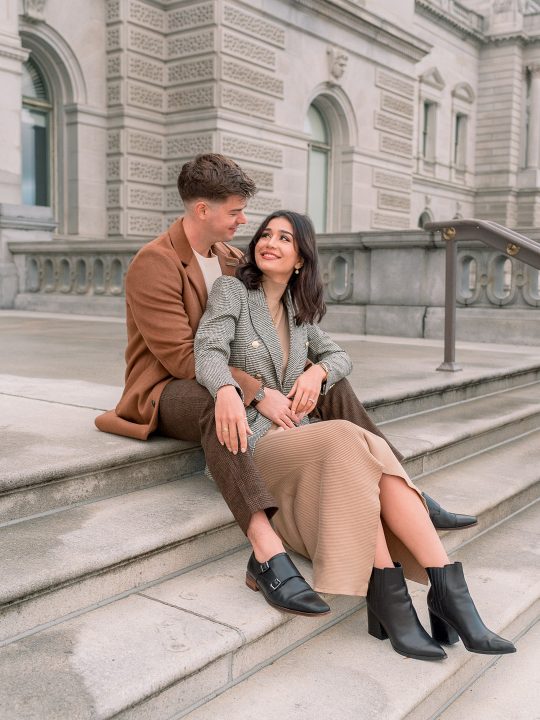 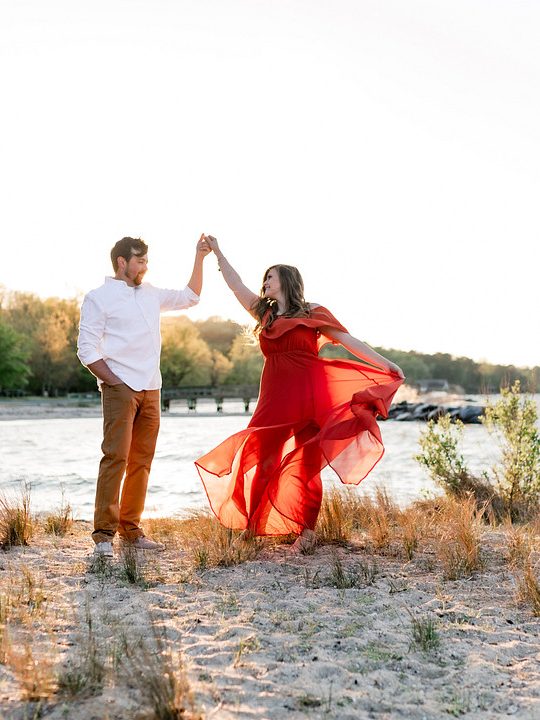