It’s been a while since I have done a Vendor Spotlight (I apologize), but we just got our wedding video back this past week, and it made me realize all over again just how insanely lucky we were to snag the best wedding band in Washington DC, The Winn Brothers Band. 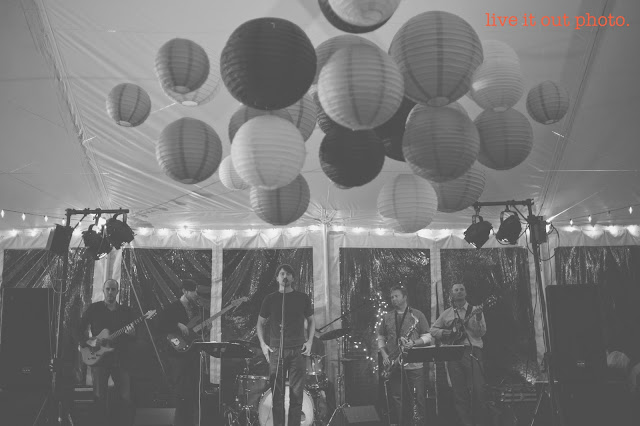 (yes, they played our wedding)

And so you might think I am biased – but all you have to do is look at their schedule and you’ll see just how in demand this band is.

A bit on how we found the Winn Brothers:

I cannot even begin to recall the nightmare that was finding a wedding band; the insane amount of hours searching online and frustration when time and time again, nothing came back. Music is SUPER important to Andy and me – and we knew a ‘typical’ wedding band (a la Top 40s and the YMCA) just wouldn’t cut it. We wanted a classic rock band, that just happened to be wedding savvy (and didn’t blow our budget). I barely even remember how I even found myself upon The Winn Brothers Band’s page via (Sam Hill Entertainment), but once I saw their sample set list – it was like the clouds opened up and I felt I experienced a miracle. But then I noticed there were no audio clips online, and I had an email telling me that if we didn’t sign a contract today, there was another couple ready to sign on the line the second we turned them down.

Sign a band without hearing them? Was I really about to do this? Me – the ultimate control freak.

Well – we did and it was seriously the best gut decision I made (other than marrying my high school sweetheart *cue: awwwww*). I cannot tell anyone reading this enough, that hiring the Winn Brothers made our reception. Our guests raved (some STILL do, 5 months later) and my friend Tom, who isn’t even yet engaged, has already swore he will hire them for his own wedding.

The band mates are not only infinitely talented, but some of the nicest, most down to earth guys I have ever met.

The band gives you some options with regards to pricing and size (ability to add brass and horns) and even learns songs for some of your special dances! Plus, they are comfortable playing in pretty much any venue in and around the Washington, DC area. They also dress to request! We had them fit into our hipster-vintage vibe by dressing super cas, in jeans!

Want to get to know the band a bit better? Well you are in luck, because I actually had the pleasure (and honor) to have Gordon (bandleader, lead singer, and all around awesome guy) answer a few questions for us!!

Capitol Romance (CR): When did you get into the “Wedding Band” business and how did you find yourselves there?

Gordon Winn (GW): I guess the story goes back pretty far. In the 1990’s my brother was in a jam band out of Richmond VA called Agents of Good Roots. They signed with RCA and released a few CD’s. They performed with many of the big touring bands of the late 90’s such as Dave Matthews, Widespread Panic, Medeski Martin and Wood, Aquarium Rescue Unit and many many more. That band ran its course and they broke up around 2001. At that point Andrew began to work on a couple of music degrees at the Peabody Conservatory and we decided to put together a band here in DC. Our drummer and our bass player had played with Andrew in a band in Richmond fronted by a female singer songwriter named Regan. So, when we decided to start a little cover band, Andrew turned to Curtis (bass) and Robby (drummer) as guys who could really play anything. For a while our 5th member was Daniel Clarke, who also studied jazz piano at VCU with Curtis and Robby. He then went on to perform with Mandy Moore and now is the pianist for kd Lang. With Daniel’s departure, Robby suggested we get his friend Colin on guitar. Colin is a top level jazz musician who plays sax and guitar. He did his studies at VCU and the New School in NYC. That band is the band that has been performing for the past 5 years. We also have a great horn section from Richmond for the bigger band.

Our band began performing at social events at different bars and venues around town but limited the gigs to about 15 a year. Then about 4 years ago we were approached by a few close friends, and friends of friends, to perform at their weddings. We played those weddings and had fun and decided that we would want to pursue playing more weddings. My cousin built a web site for our band and that web presence really helped us to spread the word. More than anything, though, we have to credit Steve Andronico at The City Tavern Club, Bo Blair and Jason York, the owners of The Bayou (formerly, The Rookery) and Michael Saylor, the founder of Microstrategy, (who throws some outrageous parties a few times a year), for hiring us to play at their venues and parties. Those gigs really put us in front of many DC locals and helped us to earn a reputation as a fun party band.

Now, inquiries come into the web site every week and we really do not know most of the people for whom we play events. It started as a grass roots thing and has remained a grass roots thing. We do all of the contracting in-house, with no middle-men. The guys I play with are family and I am reminded every weekend that I am blessed to perform with some stellar musicians who are stellar people.

GW: Weddings are inherently joyous celebrations. A band could not ask for a better gig. The crowd is in a great mood and ready to party. Our job is to mirror that joy in song.  We learn three requests for each wedding and we are always intrigued by the songs that couples choose as their first dance. The range is enormous! It pushes us and also exposes us to some music that we otherwise, may not play.

For me, personally, I enjoy the correspondence with clients over the phone and over email in order to put the reception together. The business side of the band is appealing to me as well. Keeping track of numbers, scheduling and client relations are the sides of playing music that most musicians do not want to tackle. My OCD side actually digs it!

CR: Any advice to couples thinking of getting a DJ over a band?

GW: The DJ-Band debate I think is growing more and more common. It really just boils down to the musical tastes of the couple. It is also often a question of cost. A band almost always will charge a higher fee than a DJ, and as we all know, weddings have budgets. Nevertheless, I firmly believe that the energy level created by a live band always exceeds the energy of recorded music. You just cannot recreate the electric relationship that emerges at a gig between a crowd and band.

…And now we will end with Gordon’s thoughts on my own wedding, because I found it quite humorous – and totally true:

I remember how stylish your wedding was and also how rowdy things got towards the end of the night!  The choreographed dances were amazing.  I also remember that nightmare sound guy who did not have the damn cord to play the ipod and who we thought was going to collapse from exhaustion throughout the night!  There was never a dull moment that evening!

See. I told you how awesome Gordon & the rest of the band are … NOW GO HIRE THEM (if they are still available!) And then let us know that you did :)

Urban Stems Launches Wedding Collections & We Have Your Discount Code!